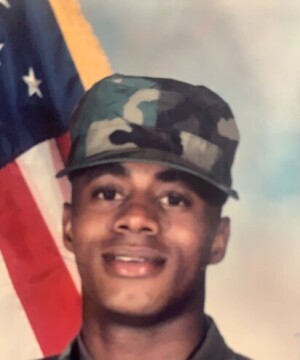 Robert Christopher Averette was born on August 8th, 1968, to the union of Billy R. Averette and Betty Joe Bradford Averrett in Sylacauga, Alabama.  Robert was affectionately known as “A-Rock” by family and friends.

Robert accepted Christ as his Lord and Savior at an early age and united with New Hope Missionary Baptist Church, Sylacauga, Alabama.  He received his formal education in the Sylacauga City School Systems and later graduated and received his diploma at Sylacauga High School, with the class of 1986.

On November 30th, 1990, Robert joined the United States Army where he received the National Defense Service Medal and Army Service Ribbons. On April 21st, 1991, Robert received his Honorable Discharge.  After serving in the military Robert was a dedicated employee with Avondale, Russell Mills and Royal Tires in Sylacauga, Alabama.

Robert was an awesome baseball and basketball player.  He had a passion for washing cars and cutting grass throughout the community.

Robert departed this walk of life on March 9th, 2022, in Sylacauga, Alabama.  He was preceded in death by his mother, Betty Joe Averette, sister, Shirley Jemison, Grandparents, Henry and Christine Averette, John and Julia Bradford.

To send flowers to the family or plant a tree in memory of Robert Christopher Averette, please visit our floral store.